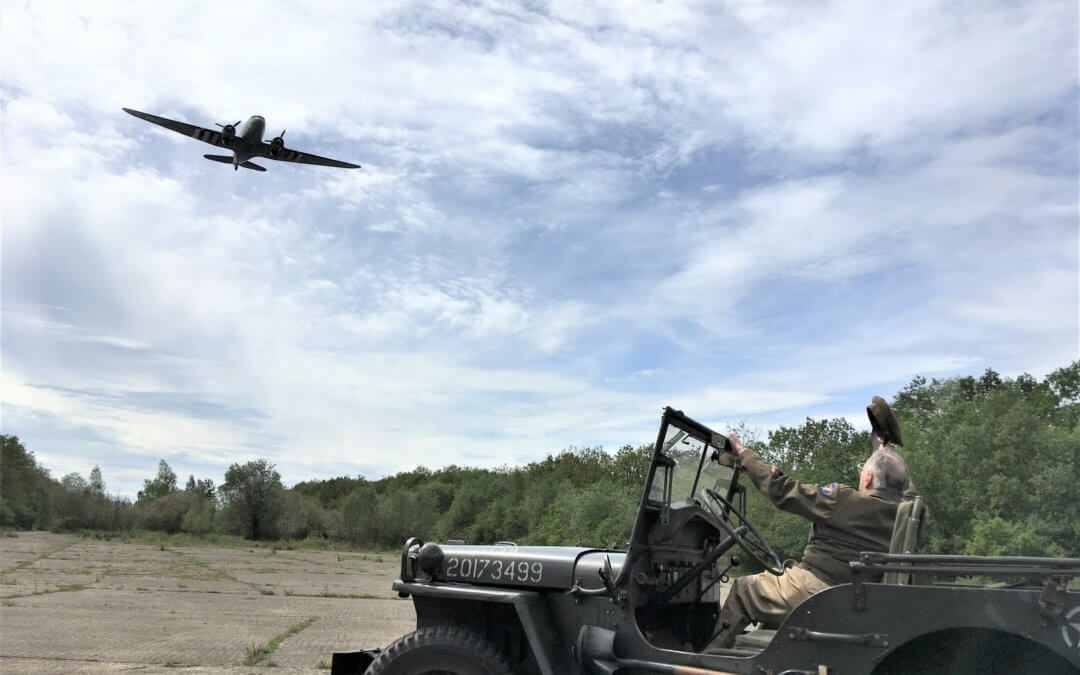 A veteran American World War II pilot has made an emotional return to a south Lincolnshire wartime airfield, 75 years after he flew from there on a perilous pre-invasion mission on the eve of D-Day.

Months had been spent training in secrecy for the mission – to drop men of the US Army’s 101st and 82nd Airborne Divisions behind enemy lines in Normandy. Their task was to secure landing areas and set up navigational aids to guide in the main airborne invasion force of C47 aircraft carrying paratroops and towing gliders.

Lt Col Hamilton was taken to the former airfield and driven to key points, including the threshold of the runway he took off from on 5 June, and the control tower. His visit was marked by a special flyover of an original WWll Douglas C47 Skytrain.

As a final act, he unveiled a new commemorative interpretation board installed in Twyford Wood by InvestSK to tell the story of the mission.

“This whole visit has been just marvellous and just so much better than I could ever have imagined. I am so grateful to everyone,” he said.  “It’s a day I will remember forever.”

“I am very surprised to see how much of the airfield is left. I expected to find a field with cattle grazing.”

Lt Colonel Hamilton was just 21 when he took part in the Pathfinder mission, his first combat mission. “I didn’t realise how important it was until we were on the way back and I saw the flotilla heading for France. You could have walked across the Channel, there were so many boats.”

His aircraft came home with 200 bullet holes,  and he spoke of flying at 50 ft in darkness above the Channel to avoid radar. “I followed the aircraft in front,” he said. “As long as he didn’t hit the water I figured we wouldn’t. We were pretty low as we came over France and I had to lift a wing tip to avoid a church steeple close to St Mere Eglise.”

Lt Col Hamilton dismissed a description of him as a hero. “I am just a survivor,” he said. “We lived together and melded together with a job to do. Our only anxiety was that we did that job well.”

He then travelled to South Witham to meet representatives of visit co-host South Witham Parish Council, unveiled a commemorative bench, met the schoolchildren whose poppy cushions handicraft financed it and had lunch at South Witham Academy.

For InvestSK, Chief Executive Steve Bowyer said: “South Kesteven is absolutely full of history and unknown stories. Surely there can be no more important part of our more recent history than the D-Day landings in 1944 which began the liberation of Europe.

“To realise that North Witham played such a key role in that mission and hosted so many brave young men like David Hamilton is both awe-inspiring and humbling. We need to keep these stories alive: not just for the heritage of the place, but as a commemoration of the people that have shaped our history.”

Lt Colonel Hamilton’s visit to the UK was thanks to supporters of America’s Commemorative Air Force (CAF) and is part of a larger schedule of activities surrounding the 75th Anniversary of D-Day, including a mass flyover of American aircraft, known as the D-Day Squadron (www.daksovernormandy.com ).

Hank Coates, president and CEO of CAF, said: “Dave Hamilton is a true American hero. He and his fellow Pathfinders flew a dangerous and vital mission in advance of the main D-Day invasion.

“We were thrilled to have the opportunity to organise this trip for Dave, giving him a chance not only to return to his old airfield, but to share his story with the residents of North and South Witham on the 75th anniversary of this historic event.”