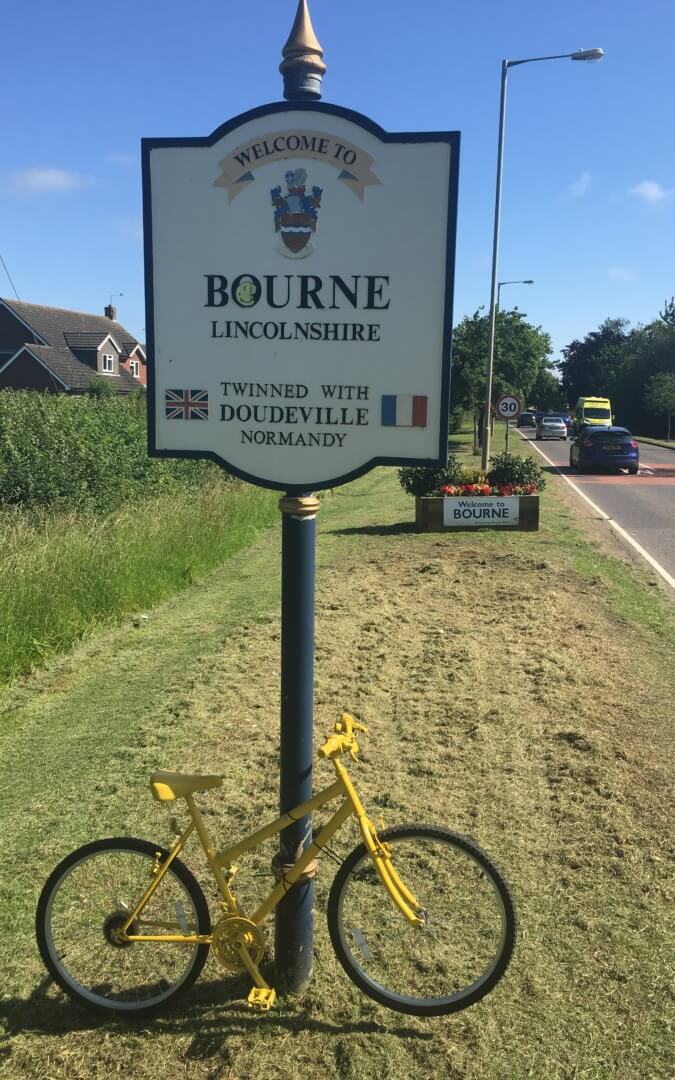 Yellow painted bikes are appearing along the race routes of next month’s Bourne CiCLE Festival to raise awareness of the event.

They include a classic bike from the 1940s donated by Grantham man John Baldwin, re-painted and placed in Billingborough to commemorate his late father.

John, of Cedarwood Avenue, donated three bikes to the festival. He made a special request that his father’s bike was displayed in the village where the family used to live.

“I liked the idea of his bike going on show back in our village as part of the festival,” he said. “I couldn’t bring myself to scrap it.”

South Kesteven District Council is organising the festival, along with the Discover South Kesteven visitor team at InvestSK, the council’s economic growth and regeneration company.

Andrew Norman, Head of Visitor Economy for InvestSK said “We wanted to recreate the look and feel of the Tour of Yorkshire with these colourful bikes. We are looking to establish South Kesteven as a cycling destination and want to make a splash with our first festival.

“We put out an appeal for unwanted cycles to paint yellow and place along the routes and more than 50 have now been handed over, many of which are now in place.”

All the bikes are being painted yellow to brighten both the men’s and women’s races in the district’s first cycling festival.  One of the first was put in place on the outskirts of Bourne.

Others will appear along the men’s 175-kilometre road race route and the 115-kilometre women’s route, with both races expected to attract the UK’s top professional teams.

Both start and finish in Bourne, going through the town twice before final dashes to the finish.

The men’s race takes in Billingborough, Folkingham and Old Somerby and the women’s race includes Ingoldsby, Bitchfield and Castle Bytham.

The festival also stages an amateur riders’ Sportive on Saturday morning and a women’s team time trial on Sunday morning.

For all routes, timings and festival details; www.bourneciclefestival.com